Sorry for all the backlogs!
Just came back from Japan and we are missing this country so much! Being first timer to Japan, we were thrilled to be able to experience the Japanese culture and especially the food hunting part! Papa C who loves sushi so much just couldn’t forego this “must have” typical Japanese food while we were in Japan, till we have to give up the famous Japanese cheese dessert.
The power of sushi!

It’s a food education tour that promotes Japanese food around the world!
And the main highlight of the event was the Hand Roll Sushi Workshop that was open to public to participate. This workshop was conducted by Japanese Chef Tsunetoshi Tabata and Chef Joji Hasegawa, who showed us how healthy Japanese food is, its simplicity to prepare them at home!

Chef Tsunetoshi Tabata started cooking in Japan over 40 years ago. In 2000, he moved to Malaysia and has worked for various sushi restaurants around Kuala Lumpur, and is currently at Ten Japanese Fine Dining, well-known for his authentic sushi creations. 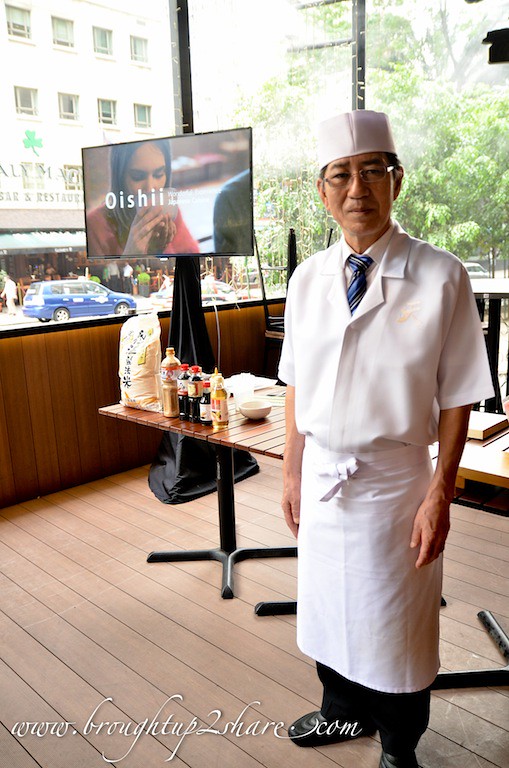 Chef Joji Hasegawa, the chef at Senya Sake & Dining, started his career in Japan in 1999. Throughout his career, he has cooked in Tokyo, Cambodia, and Malaysia, including a Michelin starred restaurant. 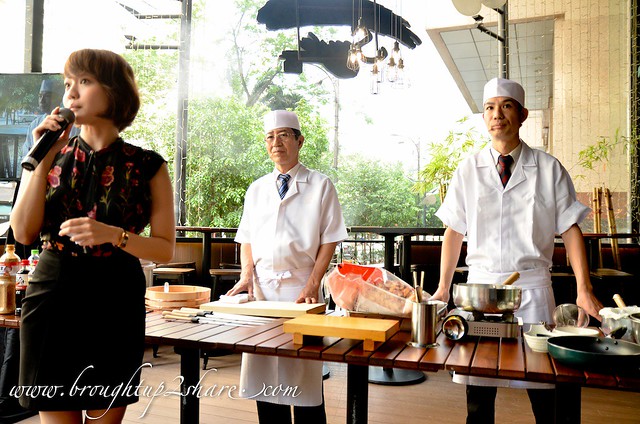 The event started with a small presentation of the Japanese concept of “Washoku” (Japanese Food).

It is an integrated approach to achieving nutritional balance and aesthetic harmony at table; both a culinary philosophy and a set of practical guidelines for preparing food.
Although the origins of washoku are deeply rooted in Japanese culinary history and habits, acyually anyone can prepare wholesome food by applying washoku principles to their own cooking!
The basic principles of Washoku are expressed in the wisdom of five.
There are five styles of cooking: simmer, raw, grill, steam and fried.
Five flavours: sweet, bitter, sour, spicy and umami
Five colours – white, black, green, yellow and red
Five dishes – one soup, and three dishes and rice

After that, Chef Hasegawa taught us how to make Dashi!
An incredibly simple broth to make at home too, it forms one of the culinary cornerstones of Japanese cooking. It’s made in about 10 minutes with just three ingredients: water, kombu (dried kelp), and bonito fish flakes. The resulting clear broth tastes like the essence of the sea!
Dashi can be used to make a fantastic bowl of miso soup, to poach fish or vegetables, or to add savoury umami flavour to any number of Japanese dishes.
You can easily get kombu & bonito flakes from Japanese supermarkets like Isetan.
And I’m glad I’ve got these ingredients from Japan & can’t wait to use them to make my own dashi! 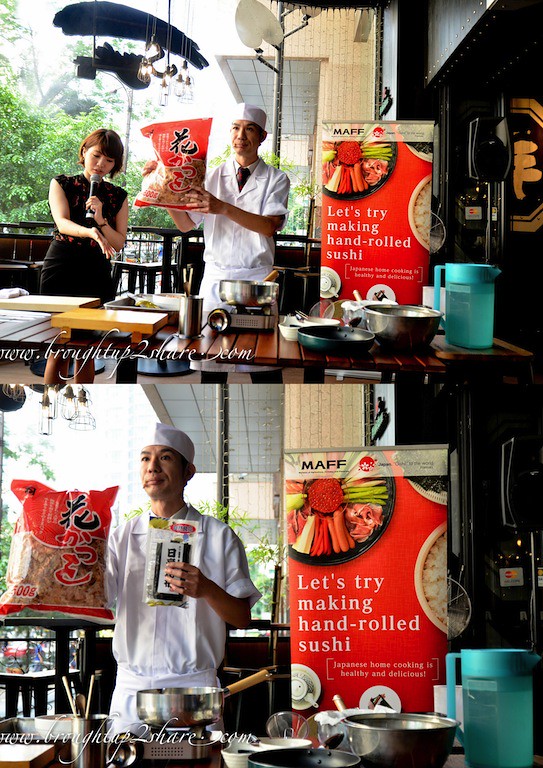 Here comes the highlight of the event! Temaki (Hand-Roll) Sushi Workshop!
Look at Chef Tabata’s knife set. Initially we thought they were different knifes to cut different fishes and vegetables. But they were all of the same size at first! The smallest knife was resulted from the sharpening over many many years, even Chef Tabata doesn’t even remember. 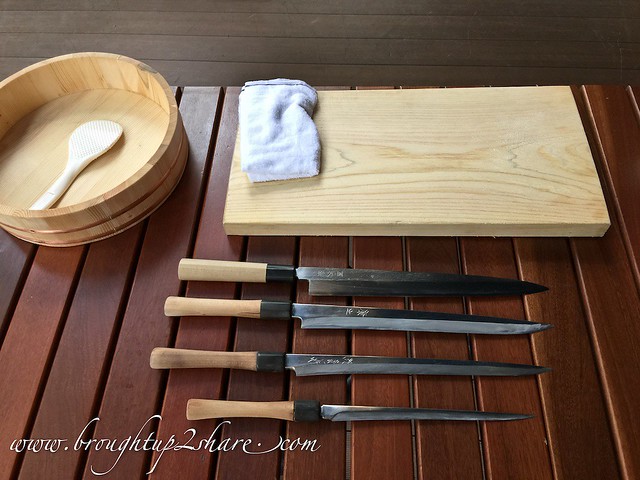 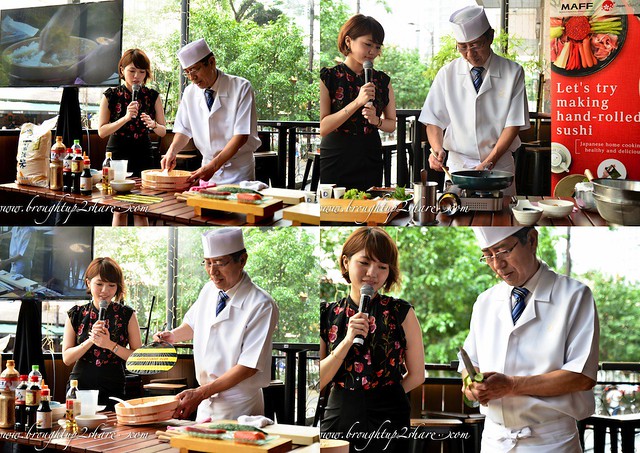 He then demonstrated how to make hand-roll temaki sushi like a swift. Temaki sushi is a form of rolled sushi, created in a cone or roll shape. It’s fun to make your own fillings and you can be creative! 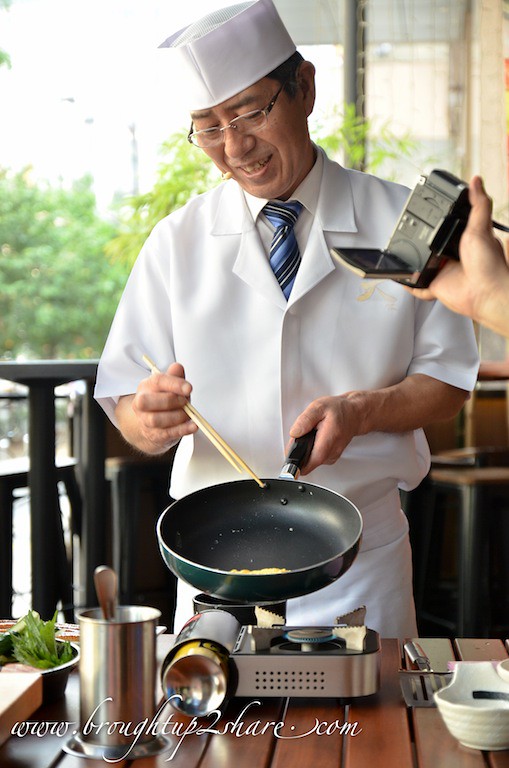 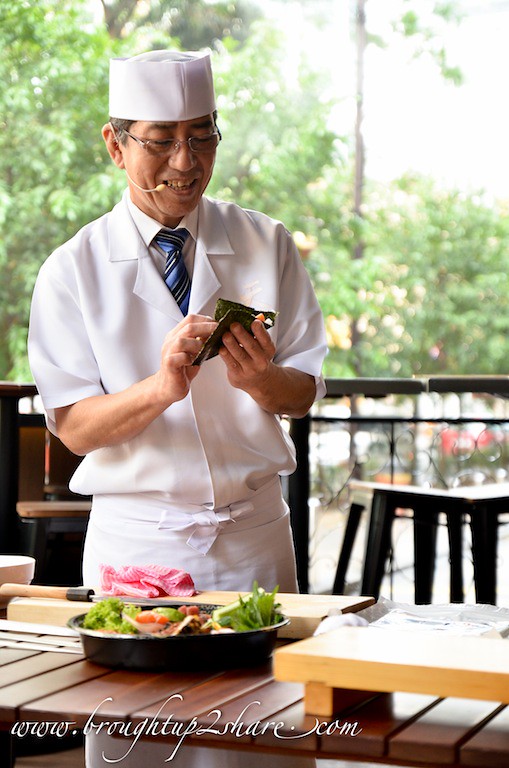 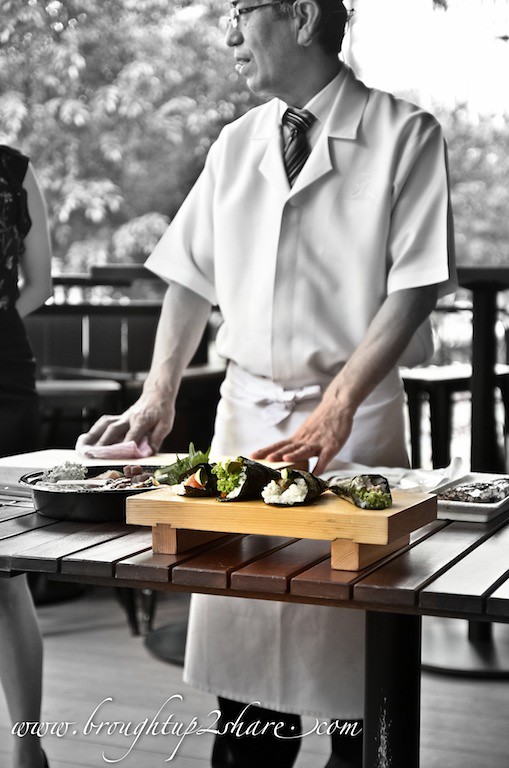 The ingredients to fill in the temaki are usually sliced raw fish, like tuna and salmon, as well as various vegetables, fish roe and cooked seafood such as octopus, unagi and prawns, even tamago (eggs)! 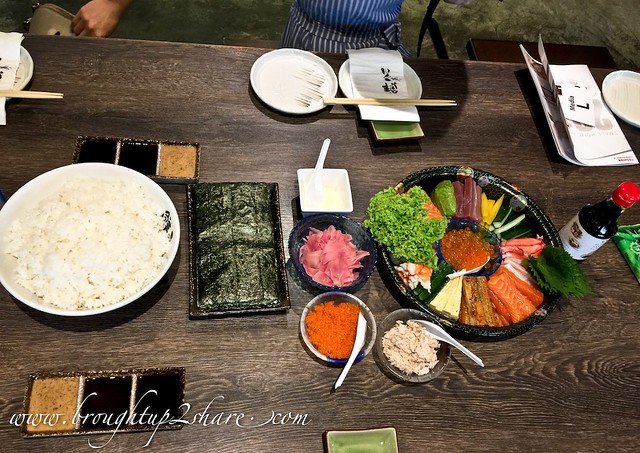 After the demonstration, we were led to their tables set up with temaki sets so that we could try hands on! Making our very own Temaki Sushi and eating them right away!
Attended the event with my best mates CityGal and Ivy was extra eventful. Taking pictures of our own “ugly” temaki, haha. But our combinations were delicious! Oishii neh!
It was not as easy as it looks! But it was definitely fun, entertaining and educational. 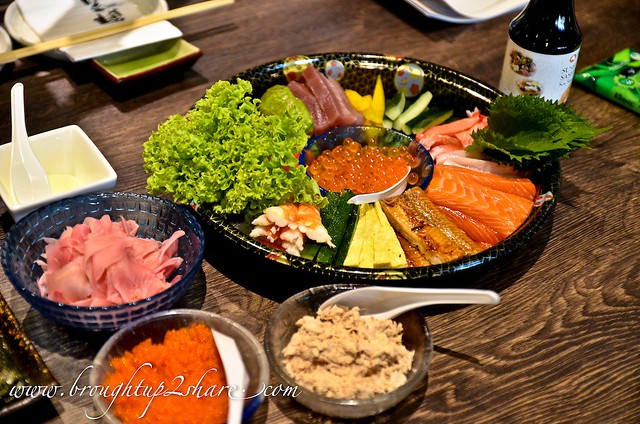 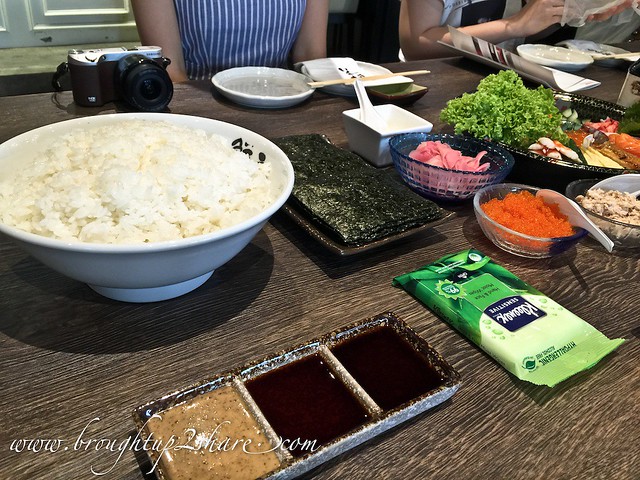 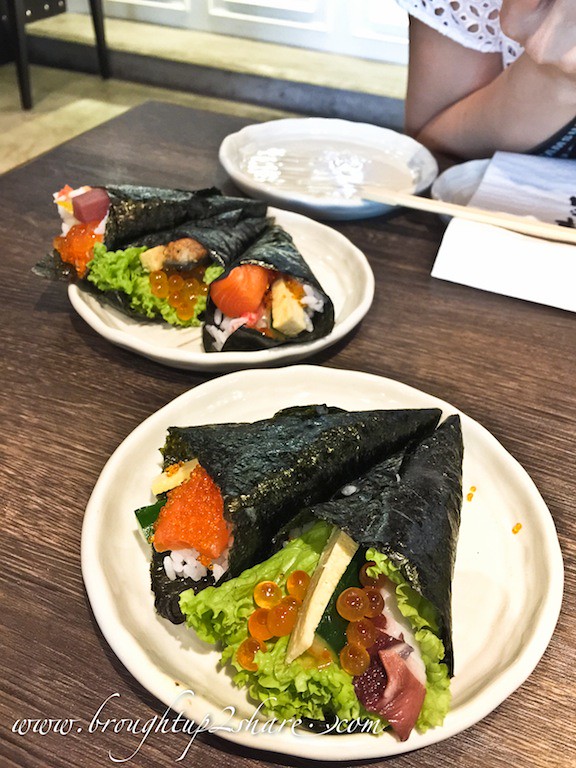 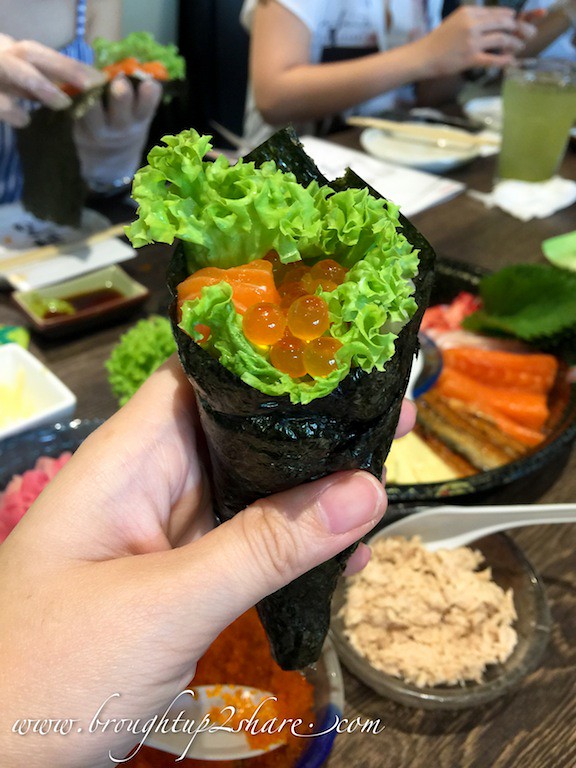 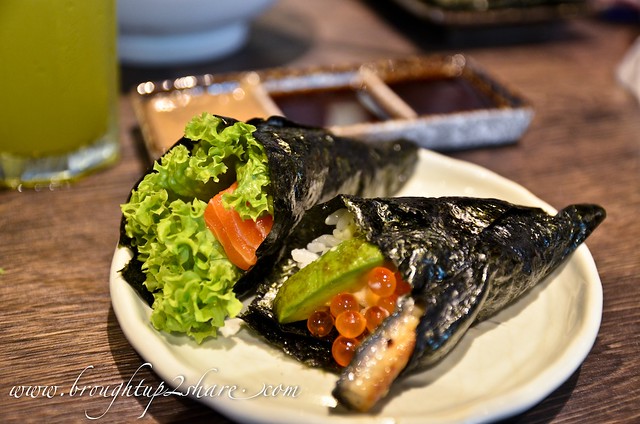 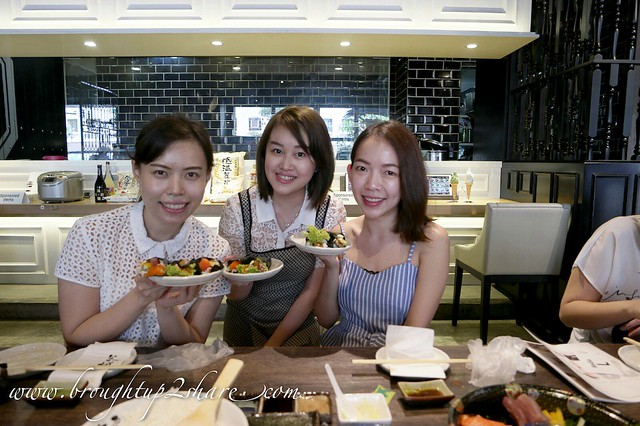 I was blown away by how much thought goes into the preparation, consumption, and appreciation of Japanese food. We’ve learnt that freshness and seasonality are the two most important principal virtues of Japanese cuisine. Not forgetting simplicity is the third principal, even dishes that require tedious preparation remain in essence, aesthetically simple. Ok I shall make Dashi tomorrow! 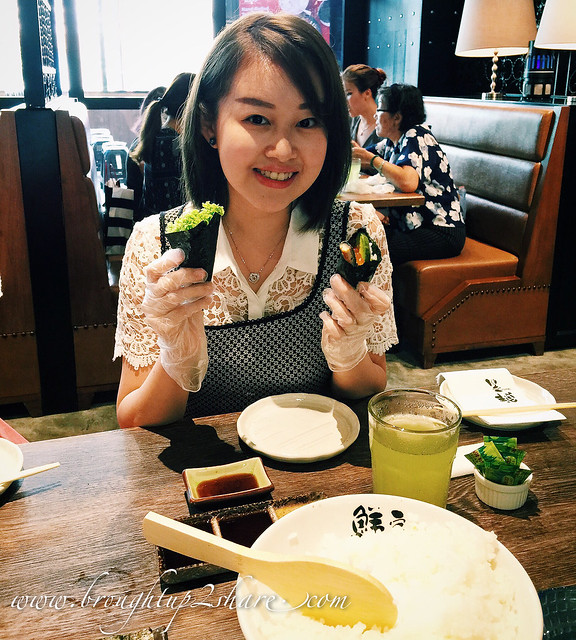 Thanks to MAFF of Japan & Senya Sake & Dining Restaurant for the amazing experience. 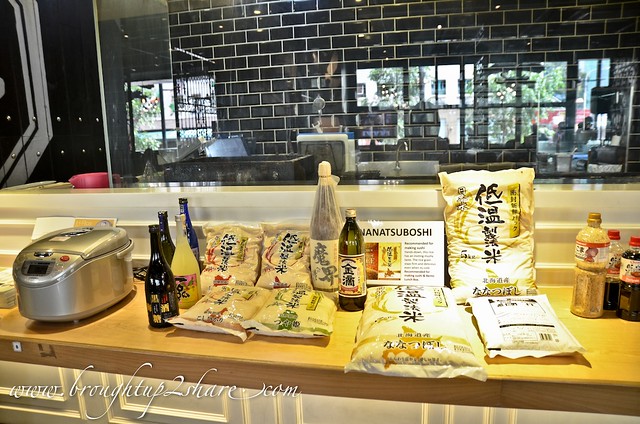 Yummy Japanese rice and sauces that you can get from local supermarkets!