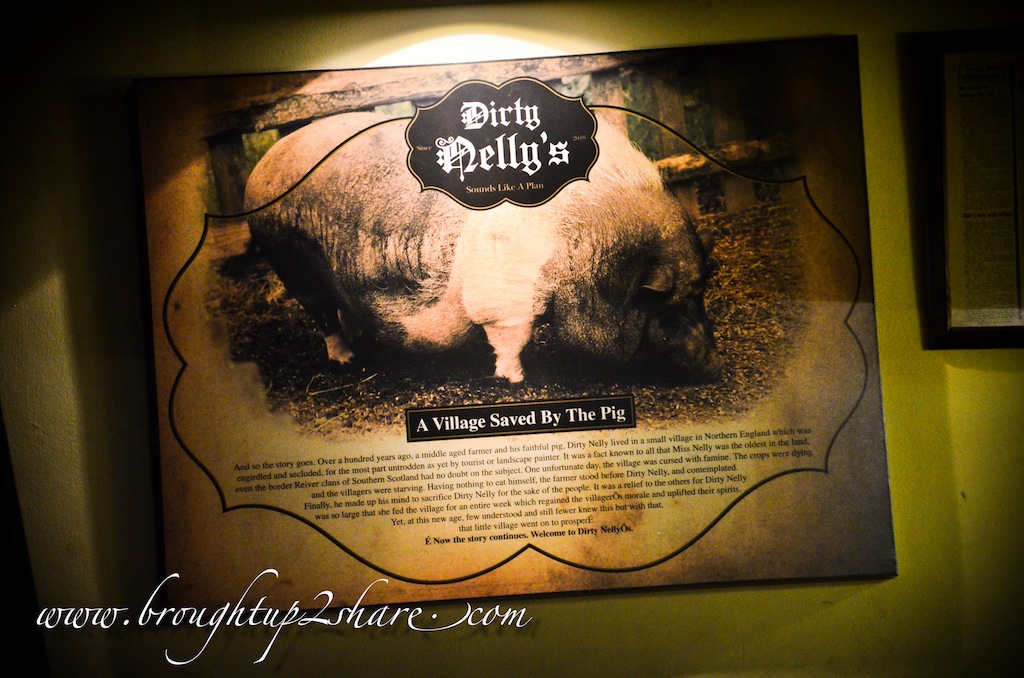 Remember how we defeated Monday blue once with Finnegan’s Irish Pub?
Another moody Tuesday after drowning ourselves with work & bad traffic, we came up with the greatest plan. For another Pub Grub! A tagline by Dirty Nelly’s, it’s a good plan to drop by this neighbourhood pub to catch some breath of malts & beer followed by grooves of music singing along with the bands.
Another igniting factor that drew us here was the story behind Dirty Nelly’s that my mom told me……

Over a hundred years ago, a middle aged farmer and his faithful pig, Dirty Nelly lived in a small village in Northern England which was engirdled and secluded, for the most part untrodden as yet by tourist or landscape painter. It was a fact known to all that Miss Nelly was the oldest in the land, even the border Reiver clans of Southern Scotland had no doubt on the subject.

One unfortunate day, the village was cursed with famine. The crops were dying and the villagers were starving. Having nothing to eat himself, the farmer stood before Dirty Nelly, and contemplated. Finally, he made up his mind to sacrifice Dirty Nelly for the sake of the people. It was a relief to the others for Dirty Nelly was so large that she fed the village for an entire week which regained the villager’s morale and uplifted their spirits.

Yet, at this new age, few understood and still fewer knew this but with that, that little village went on to prosper…
(story from their website) The old school interior with portraits of Beatles At Dirty Nelly’s it’s definitely not a normal plan if you’re not ordering some pork dishes (the comfort food here) although they do have other selection of meats for main courses & snacks collectively.
We just went for their pork snacks in which we thought they went very well with stout beers and ales, most notably Guinness 🙂 Sausage & Back Bacon – RM16
Sliced sausages sauted with pieces of back bacon, green beans, red chili and onions. A very Malaysian pub snack empowered with strong flavours of chili & onions with hints of saltiness from the bacon. Be ready to be entertained by their Daily Live Performances!
Every Tuesday night: Raymond Chia and Mary Jackson

Get drifted away by Raymond’s love songs Mary with all her charms and great vocals as well Next Pub Grub? I feel another moody day kicking in! *wink* 🙂