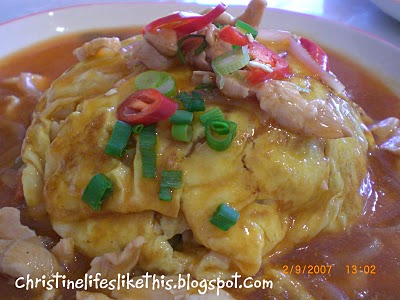 3 months without any serious shopping.

Kinda surprise me greatly for not doing any purchases of wardrobe materials and accessories (more than necessary shopping) during the sales season.. which had been prolonged in conjunction with the Merdeka Sale.. That’s a good sign isn’t it?

Learning to save is wise…
Saving is practical and realistic….
But not when I’m with my 2 girlfriends!!

We drove all the way to Damansara Perdana to look out for boutiques and we spent almost half the day hanging out at Cats Whiskers! Actually… we’re accompanied by Chris, who is so willing so drive us there! Thanks dear! He even helped us out… picked our dress, giving opinions from a guy’s point of view. So afraid that he’s bored and find our doings uninteresting, but it turned out fine I guess. Helped Yen to pick a lustrous and compatible dress for her uni prom too.. We didn’t go home empty ended of course..

Though I’m still not 100% well, but taking antibiotics alone will not put me back to a desirable condition. An additional of retail therapy will do the rest!! *smiles*

We had lunch at a nearby eatery. I’ve not dine in any of the eateries in this area before so we decided to drive around to have a look… Finally we ended up having lunch at the K3K Kopitiam. I must say that the restaurant revealed an undisputed origin of a typical kopitiam in those days. Furnished with a fusion of the olden and a lil’ modern interior, they offer a comfy environment for their customers and portrayed a definite Chinese flavour of its own. 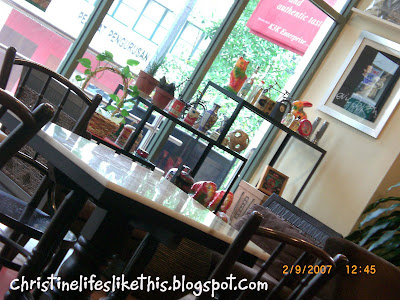 Yen just can’t bear with us while AiWei and I were taking pictures.. Maybe she’s way too hungry. *giggle* We stopped her from eating first as we have to capture some nice shots of her Pineapple Fried Rice 😛 An aromatic fried rice with the distinctive taste of pineapple’s sweet and sourish flavour. This for RM5.80. As for AiWei, she choses to have their specialty instead. The K3K Special Noodle for RM6.80. It’s a combination of spaghetti and chinese secret spicy chilli paste, accompanied with slices of trio peppers, carrot, onion, cuttlefish, prawn and spinach. My dear friend had a warm approval of their sauce.. the secret spicy chilli paste. Wonder what’s behind the secret! 😉 However, the noodles tasted somehow bland.. maybe the sauce was not well mixed with the noodles and they have not blend in enough with them. Chris had the Pattaya Fried Rice for RM5.80 as well. A rather common dish.. but it somehow surprised us as it’s served in a bed of tomato sauce! Rather unique though.. The usual Pattaya rice that I’ve had was in a drier version. Tasted not bad at all… but I’m not a craver in having excessive gravy! 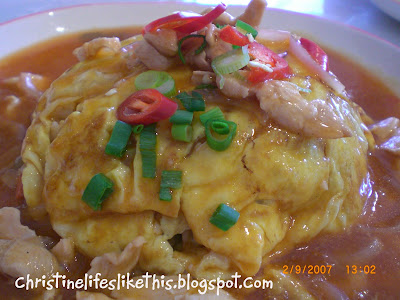 I had something plain. Plain yet tasty. With a pleasant odour of sesame oil. The Chicken Porridge for RM4.80 was my choice for the day. Thought that Chris added too much pepper for me, mildly indecent for my throat’s condition 😛 Drinks drinks!
Chris had his Cold Milky Tea for RM3 Another order of Bali Lemon before heading for another retail therapy session would be appropriate! Priced at RM2.50. Didn’t know that they’re famous for toasts until I was informed by AiWei saying that she saw a program recommending their specialties and especially toasts on TV!
So.. dear readers.. do try out their toasts when stopping by K3K and tell me how is it then 🙂
Have a happy weekend everyone!! 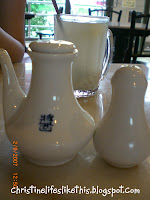