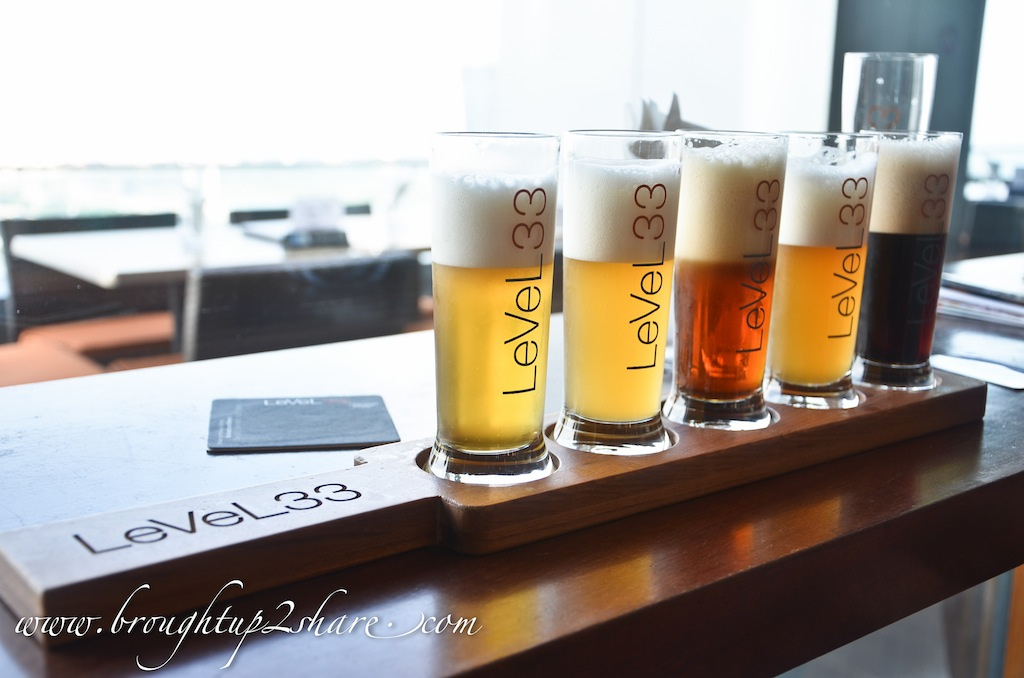 Sorry for some of the backlog posts as we were quire carried away with our routine Wednesdays hunts now and the latest #kbcgwedding! Back to some of our travel posts in between!
Just have to blog about this place in Singapore 🙂 After our comfy fine dining lunch at the Pollen and walkabout around town, we’ve decided to quench our thirst thanks to the hot weather in Singapore during our visit, with… beer!
It was about tea time and we’ve decided not to do it the “TWG-Tea” way this time.
We headed over to the World’s Highest Urban Craft-brewery! The name speaks for itself. Located at Level 33, on the Tower 1 of Marina Bay Financial Centre, this place provide one of the best views of Singapore’s Marina Bay and city skyline. The whole dining space is sophisticated and bags the title of urban penthouse dining.
Upon coming up and arriving out from the lift, you’ll be greeted by a row of huge brewers. And what we love about their concept is the copper brew house kettles taking centre stage 🙂 With this, you’ll get freshly brewed beer flowing out of the heart of LeVeL33! Lucky us, the staffs in charge were starting the brew that day! They don’t usually open the covers of the brew house kettles, like once every 3 months! Earthy, woody odour quickly filled the entire dining space. And we were invited to go up for pictures! Yay 🙂 Oaked Bock Beer
Amber-red colour, full bodied with woody notes of French Oak.
Bock beer, one of the first hopped beers in Germany, originates from the northern German town of Einbeck, where the brewmaster also served as mayor and has been acclaimed for its superior quality for over 600 years.
12-8pm – SGD14.33 (0.5 litre) Oaked Bock Beer (the glass one the far left)

For first timer visitor like us, perhaps you could try their:
Beer Tasting Padddle
0.1 litre taster of the full range of LeVel 33 craft brews – SGD20.33 Pale Ale
Hops aroma, bitter tones, medium bodied & dry.
Pale ale with a heritage going back to the 17th century , has been the most popular beer in the UK and the country’s leading export beer.

Stout
Strong roasted and malty flavours with Coffee and bitter chocolate aftertones.
Stout, originally means “brave”, has been brewed in the UK and Ireland since 1703 and is proposed in an authentic recipe for this dark brew.

House Porter
Lighter Malt and chocolate flavours with moderate hops aroma.
Inspired by the British beer history when stout originated as a strong porter called “Stout Porter”, this house brew is developed by mixing Pale Ale and Stout for this dark brew.

Wheat Beer
Refreshing, smooth, medium bodied, fruity with hints of banana.
Also known as Weissbier, meaning “white beer” or Wizenbier (wheat beer), this golden wheat beer has been brewed in Bavaria since the 16th century. Using malted wheat and special strains of top fermenting yeast, this specialty beer is rich in flavour with overtones of banana.

You can also opt to have your food and drink at the balcony area where your eye meets the beautiful skyline of Marina Bay.