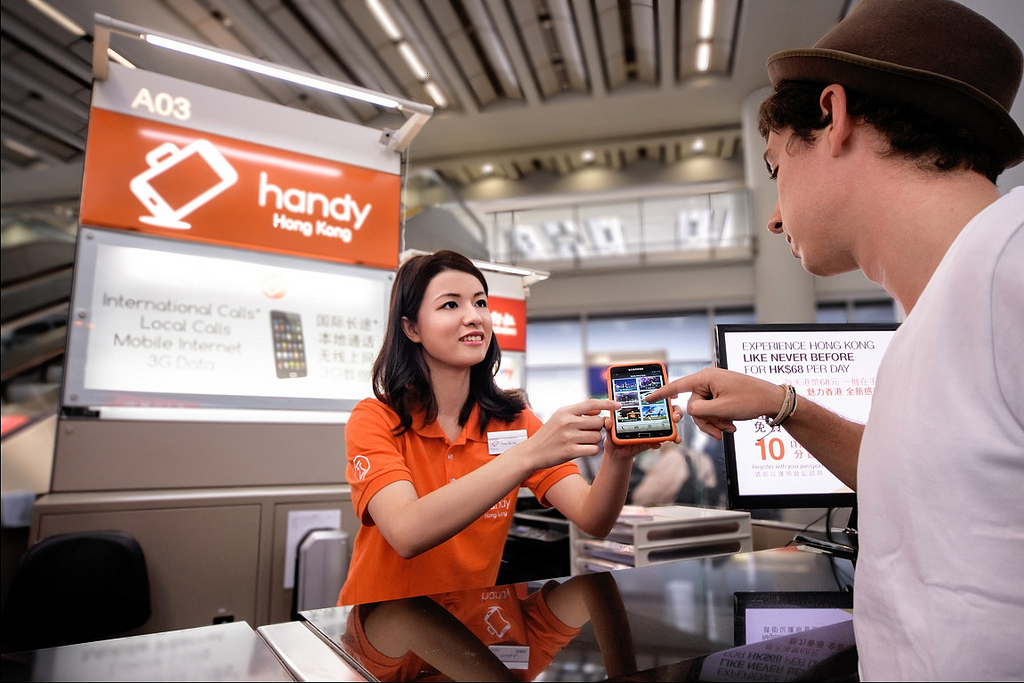 Have you heard of the Hong Kong Sevens?
We’re pretty excited as the days of the popular annual rugby action combined with the carnival atmosphere is here again!
For those who are not aware, the Hong Kong Sevens is firmly established as one of the most popular annual team sporting events in South East Asia that attracts some of the world’s greatest rugby players and thousands of fans from around the world to the Hong Kong stadium every year! And here’s the 2013 Cathay Pacific /HSBC Hong Kong Sevens, that promises an unforgettable event of the year!

Calling out for global travelers!
Travelers and friends, especially for those who are planning for a Hong Kong trip and also a bonus for Hong Kong Sevens fans, here’s some good news & great deals for you!
We would love to introduce to you: handy. The official Hong Hong Kong Sevens sponsor is a smartphone you rent by the day.
What’s so special? Read on!

#1 Beat the old fashioned way of carrying the Hong Kong map around, asking for directions not knowing where you actually at! #2 A complete city guide to Hong Kong
You can have the City Guide on a smartphone!
Believe it or not, handy provides unlimited 3G data, local(Hong Kong) and international fixed line and mobile calls to 18 countries with NO HIDDEN CHARGES!
These countries include: Canada, China, India, South Korea, Singapore, Taiwan, Thailand, USA, Australia, New Zealand, UK, Japan, France, Germany, Italy, Netherlands, Spain, South Africa (only for the duration of the Sevens, they’re considering it long-term)
Save the energy to scout for WiFi & beat the fear of terrible roaming charges! #3 Getting the latest infos on hot Shopping spots, local delights & popular sight-seeing places
You can definitely look forward to you adventurous trip to Hong Kong as the handy complete guide will allow you to travel carefree-ly even without a well prepared itinerary. The guide will feature reviews and the ‘best of’ lists across attractions, shopping, dining and nightlife. It comes with a host of pre-loaded apps including Google Maps, Skype, MTR guides, xe.com and more. handy will help you discover places! and even bring you for alley foods in HK! #5 Kukri purchasing app
You can even buy official Hong Kong Sevens merchandise through the phone. Includes hotel delivery so you can skip the queues! Too cool to be true! As we hated lining ups 🙂

#6 Receive up-to-date news of the HK Sevens events
Specially for the HK Sevens: the official Hong Kong Rugby Football Union app will update in real-time with Hong Kong Sevens scores, league information, team and player information! Indeed a handy app for the fans as all devices will have the Hong Kong Sevens and Hong Kong Rugby Football Union apps preloaded so users can receive live updates of the games & scores.
Plus, you can also video call back home to show off some best Sevens moments that you had in HK! #7 Very reasonably priced!
To rent a handy, you only need HKD$68 per day!
Cost: HKD$68 per day/USD$9 per day – no hidden charges
Deals/ Promotion!
Visitors reserving their handy online with their credit card get the first day of rental free! Pick up/Drop off location of handy:

Can’t resist handy?
More good news for you!
Win a trip to the Hong Kong Sevens!
Since handy has been signed as the official Hong Kong Sevens Mobile Phone Sponsor for the next 3 years, they are organizing a facebook competition to give away a Hong Kong Sevens 4D3N package including Hong Kong Sevens tickets, round-trip flights and hotel accomodation, plus free usage of the handy device for their trip. Details can be found at www.handyhongkong.com handy is definitely a way-to-go app as it will do a very good job in addressing the needs of global traveler.
FYI, they have already partnered with the the Hong Kong and Singapore Tourism Board, The Hong Kong Rugby Football Union, The Hong Kong Sevens, Cathay Pacific, SIA Holidays, MasterCard and LionTravel.
Soon, visiting Singapore would be just a touch away on the handy smartphone as well! 2 Replies to “handy: The City Guide on a Smartphone!”