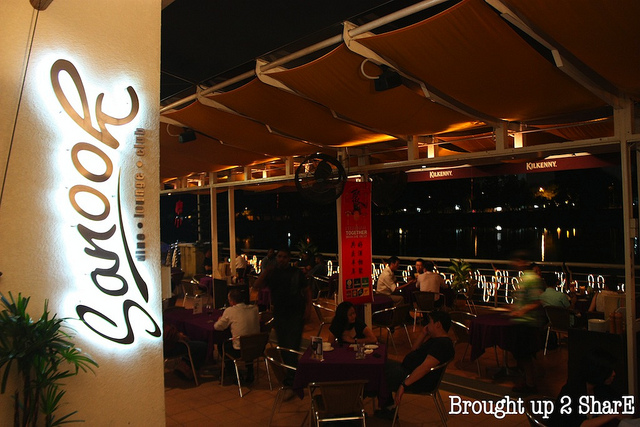 Everyone just wanna have FUN! Who doesn’t?
Beating away all worries and throw yourself into the nothing-but-fun-moments.
It didn’t hit us about this place who focused on bringing colours into your black & white diary until Ken told us so. We were delighted to be invited over to discover this hidden fun place for ourselves at Plaza Kelana Jaya; which is so new to us.


The place to be: Sanook (which means “fun” in Thai) We were welcomed by the Godfather, the warm and friendly owner who would love to introduce fun to people. Executives, chefs, waiters.. bla bla… We would say, “boring!” And instead, positions like people pleaser, chief people pleaser, chief food artist etc were used for the crew members. Cute eh?


Sanook brings on 2 concept to accommodate patron’s favour.
Alfresco@Sanook on the ground floor let the diners dine, fronting a lake. Enjoying your food while comforting yourself with the breeze and witnessing views of the lake. FYI, they don’t just serve typical Thai food. Sanook offers tasty Asian cuisines, some Western fix, Italian pastas & wood oven pizzas, not forgetting great tapas to go with your drinks and desserts! Hainanese Chicken Rice – RM17
I would never thought of ordering a plate of chicken rice at such restaurant seriously but this plate would definitely guarantee us a revisit. Rice were very fragrant, what’s more when the poached chicken were just so smooth drenched in some delicious soy sauce. Adding their homemade chili and ginger would be another boost. Roasted Chicken Chop – RM25
Now jump over to some western fix of American-styled roasted chicken surrounded with baked potato, corn on the cob and drenched with mushroom sauce Twister Braised Lamb Shank – RM46
Tender lamb meat texture with a touch of rosemary. It was served on a bed of braised baby kailan, mashed potatoes and carrots. The gravy was dope 🙂 Barra Barra Gourmet Pizza – RM35
Baked in wood fire oven pizza, this Barra Barra portion is topped with Barramundi fish with baby leeks, olives, mango mojo and dressed wild rockets. Too bad it came up a lil’ moist due to the overflowing of ingredients. But it’s a good thing isn’t it? Just roll it up and chuck it in! haha. Drinks:
Do go for their Premium Mountain Fresh Fruit Juice (100% Fruit juice with no sugar and water added) – RM12
For a healthy boost? You know what to do. They come in different flavours of fruits but is based with apple in each. Cocktails… your best friend at parties 🙂 Had enough of fun with food?
Now you can move your little feet and ladies, let your hair down at Arriba@Sanook, located on the first floor of the piazza. Check out this great deal for lunch!