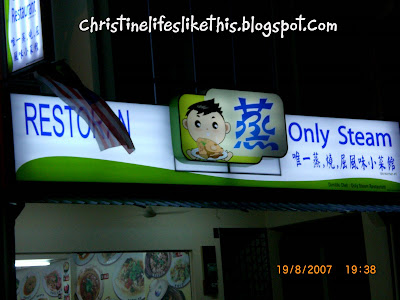 Another Chinese meal dining period devoted with my family… This restaurant, named Only Steam… opened not long ago near my place. Perhaps a few weeks back. Hey… my area is going to be overwhelmed with more eateries! More to visit nearby.. *glad* The name tells it all “only steam” – only steamed dishes are available. No fried food! Healthy? 50% oil-free? haha… probably can reduce the risk of having lipidaemia! The walls of its interior caught my attention. Filled with images of the available steamed food. Attractive and looked tempting of course! What a luring technique!
The menu was printed bilingually, in mandarin and english… so I getta know what are they serving. A “mandarin-noob” I’m being 😛 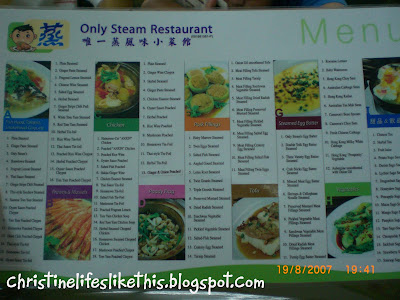 We had the Meat Filling Tofu Steamed. Funny name… The tofu was soft and silky. A great combination of gravy and meat fillings. However, Thought the this dish was overpriced for RM10! It’s been a long time since I had clams a.ka. lalas. So I decided to request for a lala dish. Introducing the Claypot Lalas with dried Chilis. This is quite disappointing as the lala was kinda small. The lalas had not much taste but its gravy is tastier! They should work more on trying to blend the tasty sauce into the lala meat! Hmm… Priced at RM15 As for vegetables, we dad ordered the Hong Kong Choi Sum.. A normal dish at RM4. Basically they just immersed them in boiling hot water and serve with fried onion and sauce. I was reluctant to have this at first, but after many convincing attempts, decided to give this a try, the Paddy Frog steamed with Brand’s Chicken Essence! Whoa… special, steamed with chicken essence. I smirk a little while eating its thigh as there’s a lot to contemplate especially while u r eating a frog! Despite that, it still tasted nice. I only had one 😛 This is priced at RM15. I love this.. but find it kinda bland though once tasted it. The 3 Variety Steamed Batter Egg which include em.. eggs, salted eggs and century eggs. RM6 for this portion. Last but not least, the steamed fish! I forgot what it’s called but it tasted not bad after all… We waited kinda long for this to be served so… we don’t really enjoyed it. Finished everything and what’s left is the fish that is priced RM25. 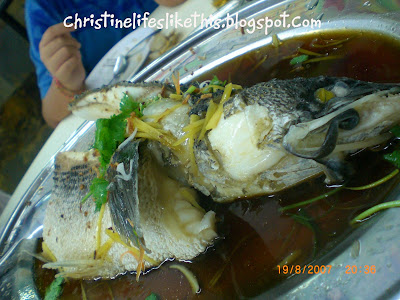 Em.. the total bill came up to about RM90++. Overpriced?? I thought so, for such dishes… can be better.. Overall, this meal didn’t satisfy our appetite to such an extent for a revisit. Dad said, “Once is enough” 😛

7 Replies to “Steamy dinner @ Only Steam”