Both of us have not been avid followers of Korean drama, and not even the very famous My Love From The Star. Haha.
Missed the rave of relating Korean Fried Chicken (KFC) with the Cheong Song Yi.
With the “Hey, why not?” moments, we were glad that we finally tried Korean Fried Chicken!
For the first time at Chicken House.
Been very outdated catching up with the latest food trends and whereabouts nowadays. I’ve been loitering so much at babies department. Hehe.

Back to Chicken House, bagged with Korean culture and food, this place is housed the happening shophouses at Solaris Mont Kiara that is minimally furnished within.

What’s so special about Korean Fried Chicken?
Tender and juicy while maintaining a plate-scratching crispiness!
Plus, it’s achieving the delicate, crackly crust that is the hallmark of this popular Korean specialty. 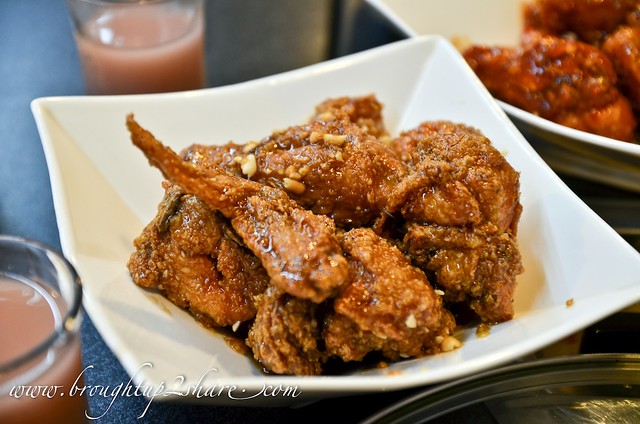 Grape Makgeolli – RM35
Makgeolli is a fermented rice wine from Korea.
And you know what? The next sparkling wine to try is Korean makgeolli!
If you like bubbles, something lightly sweet and refreshing, it’s makgeolli you’re looking for 🙂 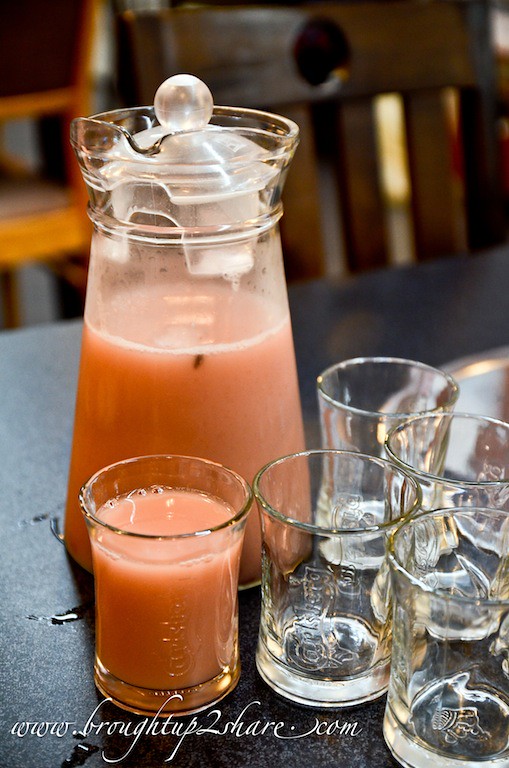 Fried Chicken: Soy sauce with garlic (half) – RM32
Finger licking good! So crispy though it’s coated evenly with the flavoursome garlic-ky sauce that kicked up the flavour overall. You will want more. 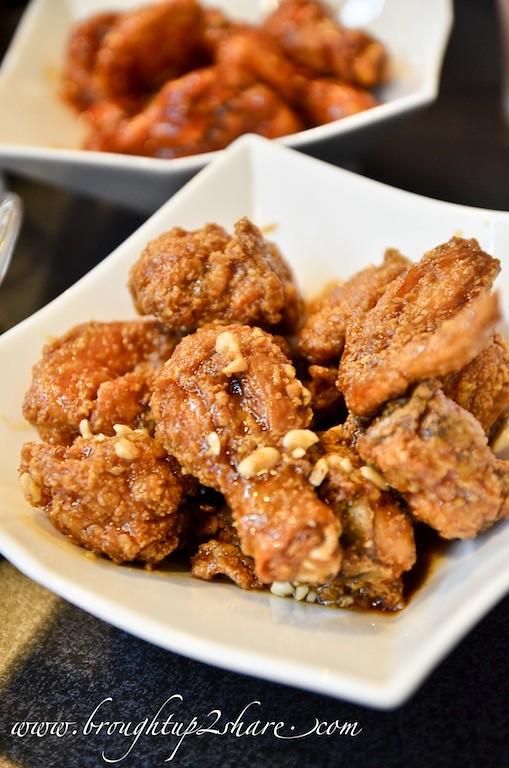 Fried Chicken: Spicy chilli sauce (half) – RM27
Kinda spicy for my taste bud but I like! Very dynamic in flavour with its kicking spicy and hints of sweetness aftertaste. Yummeh! 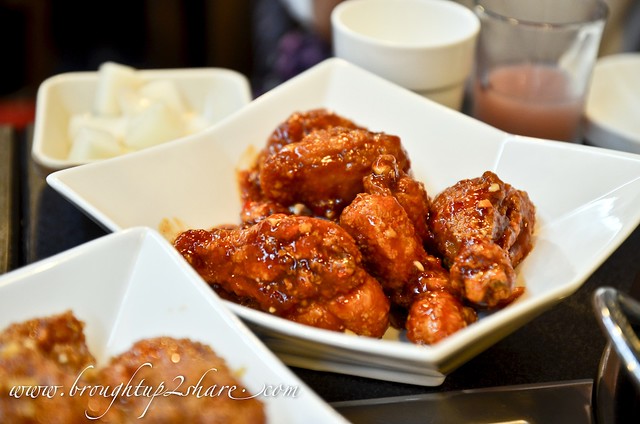 Seafood Military Soup – RM35 per person (This is a portion for 2)
Also known as the army stew, this usually a fusion dish that incorporates processed meats such as spam, bacon, and hot dogs into a Korean stew.
As food was extremely scarce after the three-year long Korean war which ended in 1953. So, those surplus processed meats from the U.S. military bases were great sources for Koreans to supplement their food shortage. And there comes a restaurant owner who start to make a stew with those meats from the Army bases.
But for this share, it’s seafood! 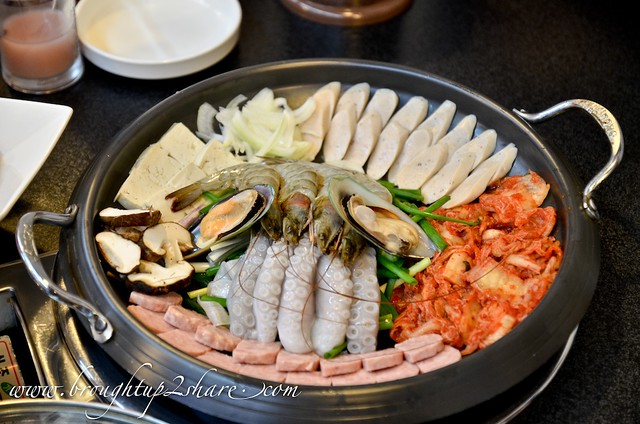 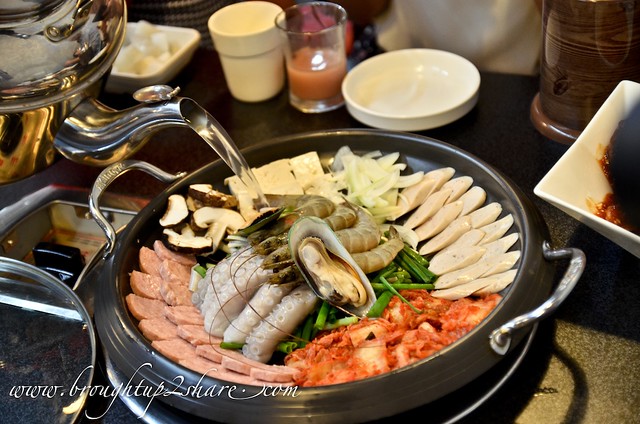 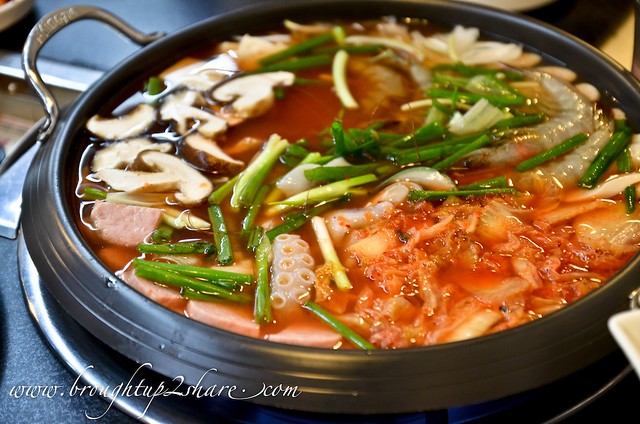 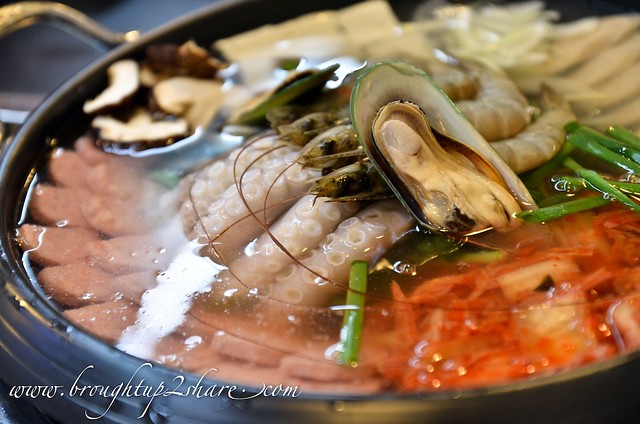 Additional RaMyeon – RM6
Kinda expensive for a portion of Korean instant noodles. But it’s at Solaris MK. So I guess we have to pay extra. Yikes. 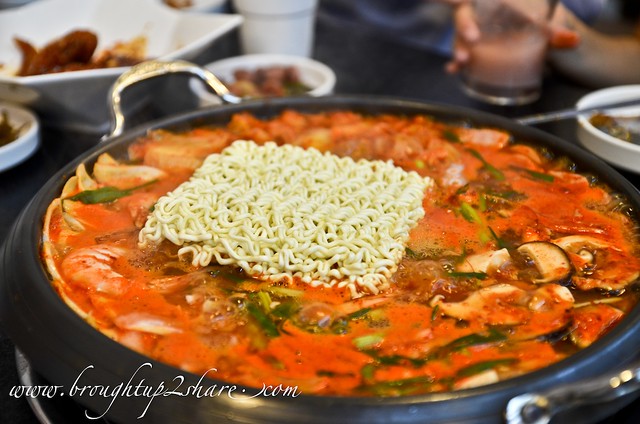