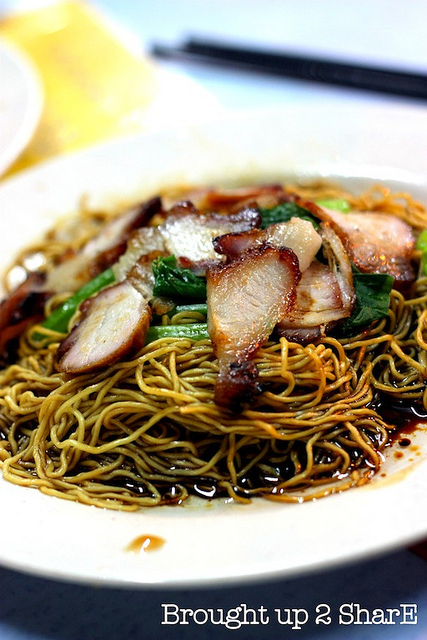 Wantan Noodles…
The old time favourite that most people are never bored of.
It’s almost a norm when it comes to ordering a plate of wantan mee upon entering kopitiams.
Be it during breakfast, lunch, dinner and perhaps supper?
What’s more when the springy egg noodles is topped with juicy and succulent char siew (barbecued pork)? *drools*


Lucky us, we were surrounded with some goody goody fares of wantan mee like the tossed-up Char Siew Zhai, Cheras famous share at Jalan Kaskas, the celebrity char siew of Meng Kee, FSF…. there are just so many 🙂


Now comes along the hidden gem tucked along Old Klang Road, on the opposite road of Pearl International Hotel. At the end of the shoplots, you would spot this area with 2 stalls, selling Wantan Noodles and “Tai Chow” (Hokkien Mee, Fried Rice etc…). A white neon signboard that just exclaim the authentic flavours of Hokkien Mee and Wantan Noodles without names of the stall. However, this can be easily spotted. Just that parking could be a problem sometimes…
Well, we don’t mind parking further… It’s worth it 🙂


Not craving for “tai chow” (heard those are good too) that night…
We had their Wantan Mee – RM4.50 per plate
Springy egg noodles never disappoint us, no ‘kan sui’ (alkaline) taste, and of course, they blended very well with the black sauce tossed out by the chef. Tasty with a bit of sweetness from the char siew. We would recommend their “pun fei sau” (half lean, half fat). It could be more succulent and not too dry. Their char siew were not over-barbecued and the outer layer were coated with a thin layer of burnt caramel. Yum!
You could order a plate of just Char Siew alone if you wish too. Wantan (Dumplings) wise, it was nicely wrapped, all plumped up with prawns and pork fillings. Broth to go with it were also tasty. So we bet their soup version of wantan noodles should be good too.