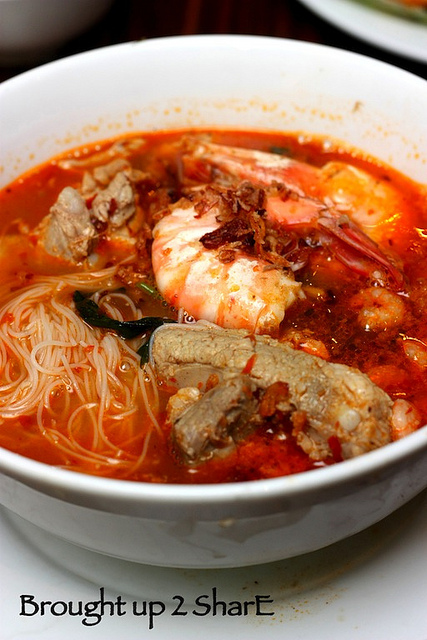 It was one of the usual after work days (Friday night!) when the workaholic gals and us decided to befriend happy hour once quite dear to us. But before the pints of alcohol pours in, dinner was what we looked forward first. Zooming fast from KL to BU for Champ’s was the first agenda for the night.


Champ’s Bistro was easy to locate as we stepped into Centre Point as their catchy buntings depicted their very famous Prawn Mee with huge prawns. Besides beers and music, it is quite a winner as most people know Champ’s by its famous pork noodle, ribs, char key tow beside prawn mee


Jumbo-sized Prawn Noodle – RM21.90
The most expensive bowl of prawn noodle that I’ve ever tasted, it did manage to impress me as it’s prawn shell infused broth was simmered with pork ribs which made the soup base sweeter somehow. Prawns are fresh and portion was huge too. However, i still thought it’s a wee bit pricey. It was named the “Damn Shiok” Hokkien Prawn Mee apparently… 🙂 Fish Head Noodle
Another huge portion of meehoon brimmed to the top with fish meat, that made the girlfriend complained it’s too much. Haha. Char Kuey Teow
Fried with lotsa ‘wok hei’, it was also topped with crab meat to add the extra texture and sweetness from the seafood to the noodle. Good toss of tasty portion. Well, we didn’t settle long at Champ’s… as Movida was waiting for us 🙂
However, you could check out Champ’s Happy Hour deal and their band hums pretty well too!