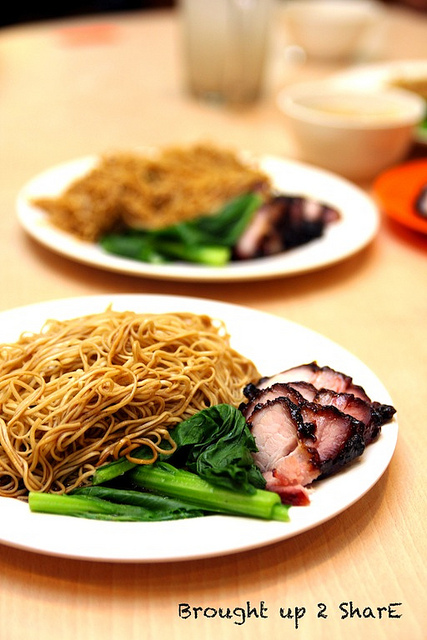 You would eventually drive the extra miles just to savour a good plate of wantan noodles.
Oh yes we would, we swear.


It happened during one late evening having learnt that Char Siew Zai has a branch at SS2. We google-map-ed and GPS-ed the exact spot but Char Siew Zhai was nowhere to be found.


“Wherefore art thou Char Siew Zhai?”
Never give up. The boy’s capital, mind you, we headed to their HQ at Paramount Garden.


Fixing our eyes on the wantan noodles and char siew (bbq pork) of course, we hurriedly ordered:


Wantan mee with char siew & wantan – RM5
Very springy noodles and with no disappointment at all, we cleaned the plate. Fast.
However, the char siew was not up to expectation. Perhaps the uneven distribution of lean meat and fats made it kinda dry. But nevertheless, the taste was alright! We should make a request next time. Dumplings in Soup
Very generous fillings that made every bite a fruitful one. Yum.
But… the soup was kinda salty tho. For me, still tolerable 🙂 Springy smooth egg noodle! We love it most. But does this have to do their the kung-fu hustle like this?? Tossing and catching the blanched egg noodles all around!
I hope they don’t get stuck to the ceiling tho!


Does anyone know whether their SS2 branch is still around?
Cos we’re not able to locate it.