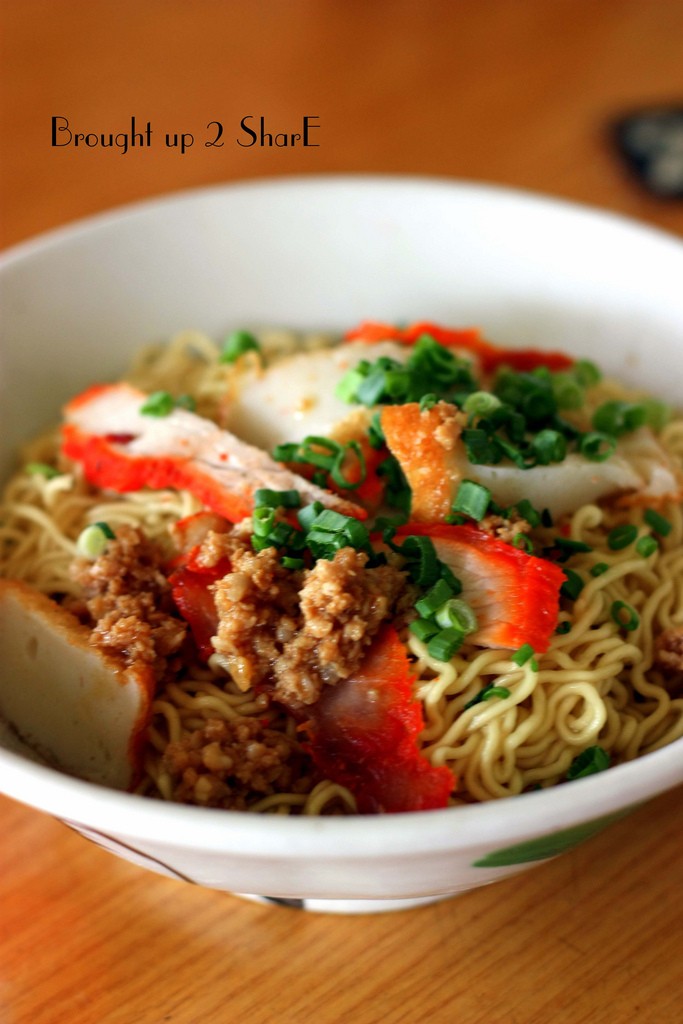 We have been thinking of visiting Miri for quite sometime and finally it was brought to fruition. Since Miss Jean offered us exclusive accommodation and thanks for being such a helpful and thoughtful tour guide, she made Miri even yummier!

“You’ll have to try this, you can’t find this in KL…” quoted Miss Jean, which made us even curious to try and expanded our appetite. I bid goodbye to my waistline.

These were just some their local fares.
Mainly noodles in this post and more in the next one 🙂

1. Miri’s Kolok Mee (Sarawak Dried Noodles)
According to Miss Jean, Miri’s version is more of FooChow style, which was different in taste, noodle texture and colour from the ones at Kuching. One of our favourite, we’re still not bored of it. From breakfast till supper, the inhabitants here (Chinese, mostly FooChow population dominated) could put away with kolok mee.
We prefer the original version (without any additional sauce). You can opt to add on black soy sauce or char siew sauce, which was a lil’ red. Thumbs up 🙂 2. Dian Bian Hu (Silky-smooth wok noodles)
A popular FooChow dish,it is actually rice flour noodles. How they were cooked? Firstly, fill the wok with stock and as it comes to a boil, pour the runny rice flour batter around the top of the wok. As the batter sets, gently scrapes it off the sides with a spatula and lets it fall into the boiling stock. Then add light soy sauce, fried shallots, cuttlefish, black fungus and fish balls and cooks them for a few minutes.
Dian Bian Hu are eaten with a soup spoon, as they are too delicate to hold with chopsticks. The soup is light and subtle.
Source of recipe from thestar. 3. Fried Corn Starch Noodles
Very chewy. Tasted like hokkien noodles and rice noodle at the same time 😉 I remembered having these at KL near Jalan Genting Klang. But it was ages ago. 5. Sarawak Laksa
We were warned to take note that Miri doesn’t serve the best Sarawak Laksa in town, and were propped up to try the Sarawak Laksa located in Lucky Garden, Bangsar (still on our list). It seems that Kuching served better Sarawak Laksa, from where it was originated.
What’s so different from our usually bowl of curry laksa in KL? As most of you are aware of, Sarawak Laksa’s soup contains no curry in its ingredient at all. It has a base of sambal belacan, sour tamarind, garlic,lemon grass and coconut milk, topped with omelette strips, chicken strips, prawns, fresh coriander and optionally lime. 7. Wantan Soup
Feeling bland while eating just dried noodles? Order yourself a bowl of pork dumpling with soup to weigh down your tummy! 8. Kueh Chap
Flat noodles served in herbal soup boiled with an assortment parts of the pork and meat with (hard boiled egg and fried bean curd. The parts may include pork belly, skin, ears, tongue, intestines, stomach and lean meat.

9. Rojak, Sotong, Kuih Udang, Tofu and ABC Special
You’ll see most people dropping by during tea-time. A plate of rojak with assortment of fruits and deep fried favourites on a hot sunny day, ABC Special to cool down creates relieve and thirst quenching property. 11. Fast Food @ Sugar Bun
Neither McD or KFC were their favourite fast food chain in Sarawak. Sugar Bun was at the top in Sarawak. FYI, there’s one Sugar Bun outlet located in Metro Kajang in Kajang city centre. 12. Teh C Special
They used brown sugar syrup instead (note the dark layer below. It’s definitely not coffee). A different type of sweetness added to our tea, I find it overly sweetened ;P 13. Exploring Tamu Muhibbah.
A marketplace where Mirians and the neighbouring Bruneians buy and sell local products from handicrafts merchandise to native local goods and food.
Tamu is sort of a meeting place where people of all races from the villages and outskirts of Miri region visit for purchasing as well as selling their food stuffs.
Here you can find different variety of outlandish and weird things, colourful arrays of goods on sale. We were more keen on fruits that day! Chris with his Durians from the hills. Petite, spiky fruit with the dry and orange-y flesh. RM7 for this small king of fruits. We couldn’t stop refraining ourselves from eating up Miri. Imagine a big bowl of noodle just at RM2.50!
We know there are more.
Luckily time doesn’t allow us to do so.
More in Part 2.

17 Replies to “Miri, Sarawak Part 1: Miri in our Stomach”